A road bridge in Sweden might appear modest at first glance, but a recent inspection shows that it has an important message to tell in terms of cost-efficiency and bridge design standards.

When the municipality of Nynäshamn was planning a road bridge that opened in 2011, its primary goal was to provide access to its growing ferry port. However, it also wanted the bridge to provide long-term financial value and environmental sustainability by requiring little maintenance over a lifetime of 100 years.

To achieve this, the municipality chose a composite bridge design that uses stainless steel as the material for the structural i-beams, to avoid the need for maintenance with painting or coating. The bridge also has a stiff design that eliminates the use of bearings to minimize maintenance requirements.

While the resulting structure is similar to many other short-span bridges across Europe, key aspects of its design can inform the design of bridges around the world. Governments are increasingly turning to infrastructure that provides good value to taxpayers over the long term by providing high availability and requiring little maintenance. This is measured by Life Cycle Cost (LCC), which is the total cost to plan, design, build, operate, maintain, dismantle and recycle a bridge at every stage of its life.

However, only time can show whether the approach of specifying a bridge for optimized LCC has been successful in Nynäshamn. Therefore, Outokumpu sent Sukanya Hägg Mameng, its corrosion research engineer, to inspect and report on the condition of the stainless steel bridge beams in June 2022.

Built before the design standard was written

“The bridge is an early example of one that uses stainless steel for the i-beams that support the deck,” says Mameng. “In fact, it was such an early design that it was planned and built before the guidance on material selection was integrated into the EN 1993-1-4 standard that covers the design of stainless steel structures.”

This guidance was published in 2015, four years after the project was completed. It classifies the environments for bridges based on factors that influence corrosivity. These include proximity to the sea, level of air pollution and use of de-icing salts in winter, as well as whether a structure will be exposed to washing from rainwater.

Under the Eurocode standard, sites are categorized under different levels in Roman numerals from I to V, which show increasing likelihood of corrosion. To limit the impact, the standard makes recommendations for the Corrosion Resistance Class (CRC) of the stainless steel and even suggests specific grades that are appropriate for a given site.

The site of the Nynäshamn bridge is typical of low-lying coastal areas. The structure is within 250 meters of the Baltic Sea and spans a pond of brackish water. In addition, because the beams are under the deck, they never experience washing by the rain. This combination of factors is categorized as requiring CRC IV under the Eurocode standard.

A bridge designer working today would follow the advice to select a high alloyed duplex stainless steel such as Outokumpu’s Forta DX 2205. However, the Nynäshamn bridge engineers selected Forta LDX 2101. It is a lower alloyed grade of stainless steel that is recommended for CRC III environments in the Eurocode standard. This makes it suitable for sites that are further inland, where potentially corrosive salts might be used to prevent ice building up on the roads in winter.

“The specification of the CRC III material has placed a question mark over the Nynäshamn bridge. Some people might think that the bridge is underspecified – and this could potentially limit its service life and create cost implications for the municipality. If the bridge is experiencing more corrosion than anticipated, the local authority will need to find budget for maintenance and repair that was never intended.”

However, the choice of alloy could have much wider repercussions for other sites around the world. If the structural steelwork had experienced any corrosion, it could undermine confidence in the suitability of stainless steel for bridges.

As a result, there was a lot at stake when Outokumpu scheduled an inspection of the Nynäshamn bridge after 11 years of life to look for the tell-tale signs of corrosion.

Mameng explains: “Corrosion is a complex field but we’d typically expect to see uniform corrosion on a bridge of this type if was made from carbon steel. This is where the entire surface of a structure experiences corrosion at the same rate and it starts off looking like orange staining – so we didn’t want to see that.”

A site visit is just the start of any bridge inspection. While it gives a first impression on the structure’s condition, it’s also an opportunity to gather data with field instruments and take samples for laboratory testing.

“The first task is photography to show the general condition and situation of the bridge. We then use a hand-held x-ray device to confirm that the stainless steel grade is what we expect,” says Mameng. “We also record detailed microscopic photographs and take measurements of the surface roughness as it can influence the initiation of corrosion.”

The inspection then went on to gather data from areas of the bridge where there was evidence of orange staining, discoloration or build-up of substances on the surface of beams. Analysis of samples in the laboratory was undertaken later. Welded joints were another important area of focus as stainless steel’s microstructure and corrosion resistance can be altered in the heat affected zone (HAZ) of a weld.

“At first glance, the bridge’s stainless steel members looked structurally sound, and other bridge components such as the concrete deck and roadside barriers were also in good condition. However, there was some orange marking and contamination on the web, flange and abutment plate.

“It would be easy to assume that the discoloration was the first sign of surface corrosion. However,

inspection of the microscopic photographs in the laboratory showed no sign of corrosion.

We concluded that the staining developed as a result of iron particles from other construction and fabrication activity near the bridge. One likely culprit is the steel trestles that were used to support the deck during transport and installation as the staining and dirt was focused in a few particular areas.” 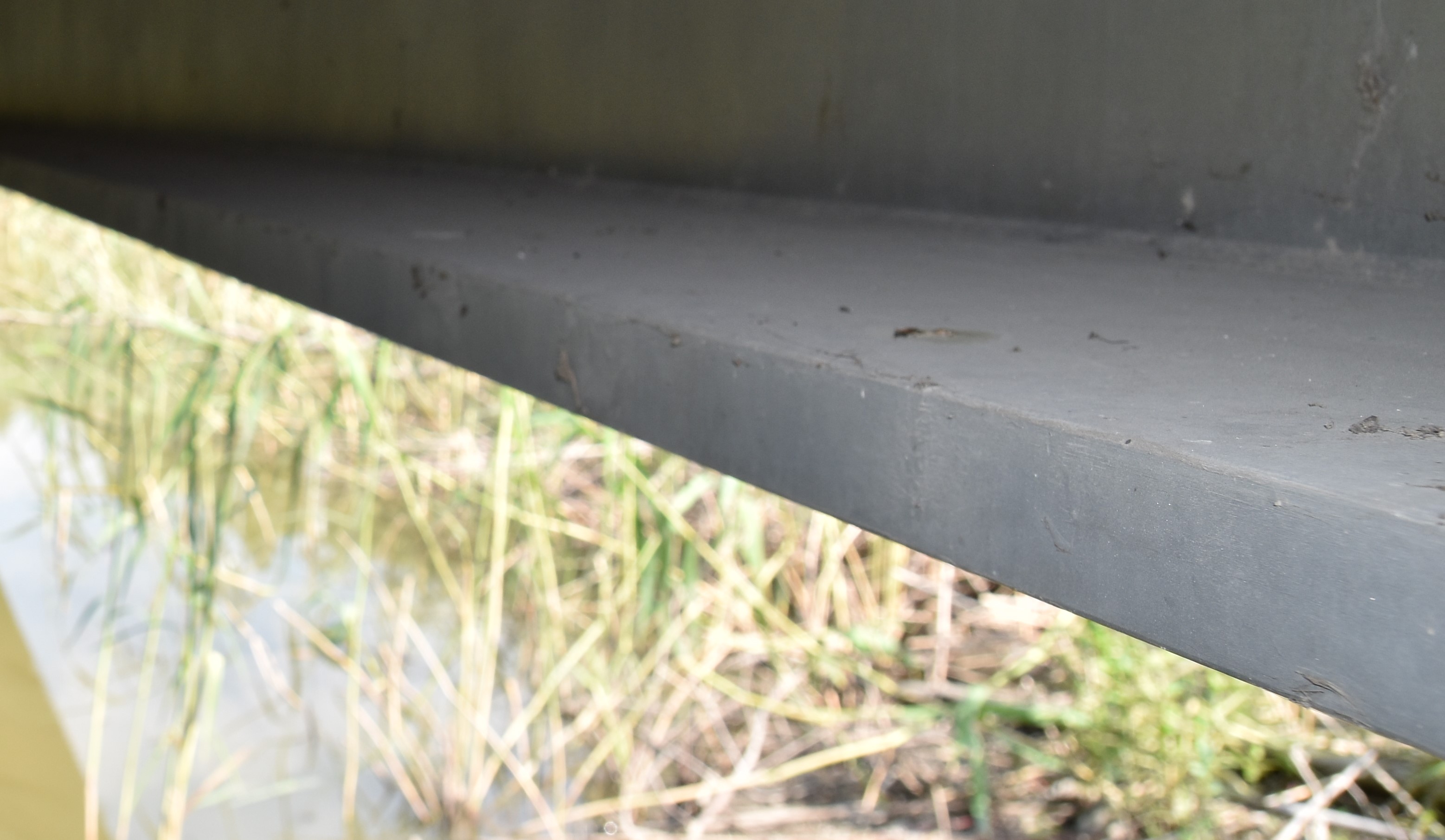 Water samples were sent to a specialist laboratory SGS Analytics Sweden for analysis. It found that the chloride content for the stagnant pond water was well below 100 ppm, which is significantly lower than the ocean’s salinity.

“The low salinity of the water at Nynäshamn is particularly interesting. Its low chloride content will have helped the apparently underspecified material to remain in pristine condition despite being in a CRC IV environment. It’s likely that the bridge’s original design engineers took this into account when they specified Forta LDX 2101 all those years ago.”

In addition, Outokumpu’s in-house materials laboratory analysed samples of notable contamination from the surface of the beams using a scanning electron microscope (SEM) and x-ray spectroscopy. This identified the nature and chemical composition of the pollutants in the environment.

The analysis shows that the samples were compounds based on the elements oxygen, iron, sodium, magnesium, silicon, sulfur, potassium, calcium, phosphorus, chlorine and aluminum. This mix suggests the presence of salts based on chlorides and sulfates, sulfur compounds and metal oxides.

The likely sources are sea salts and winter de-icing salts, as well as corrosion of particles from nearby fabrication activity, plus general dirt, dust and sand in the environment. None of them have had an adverse effect on the Forta LDX 2101 bridge beams. 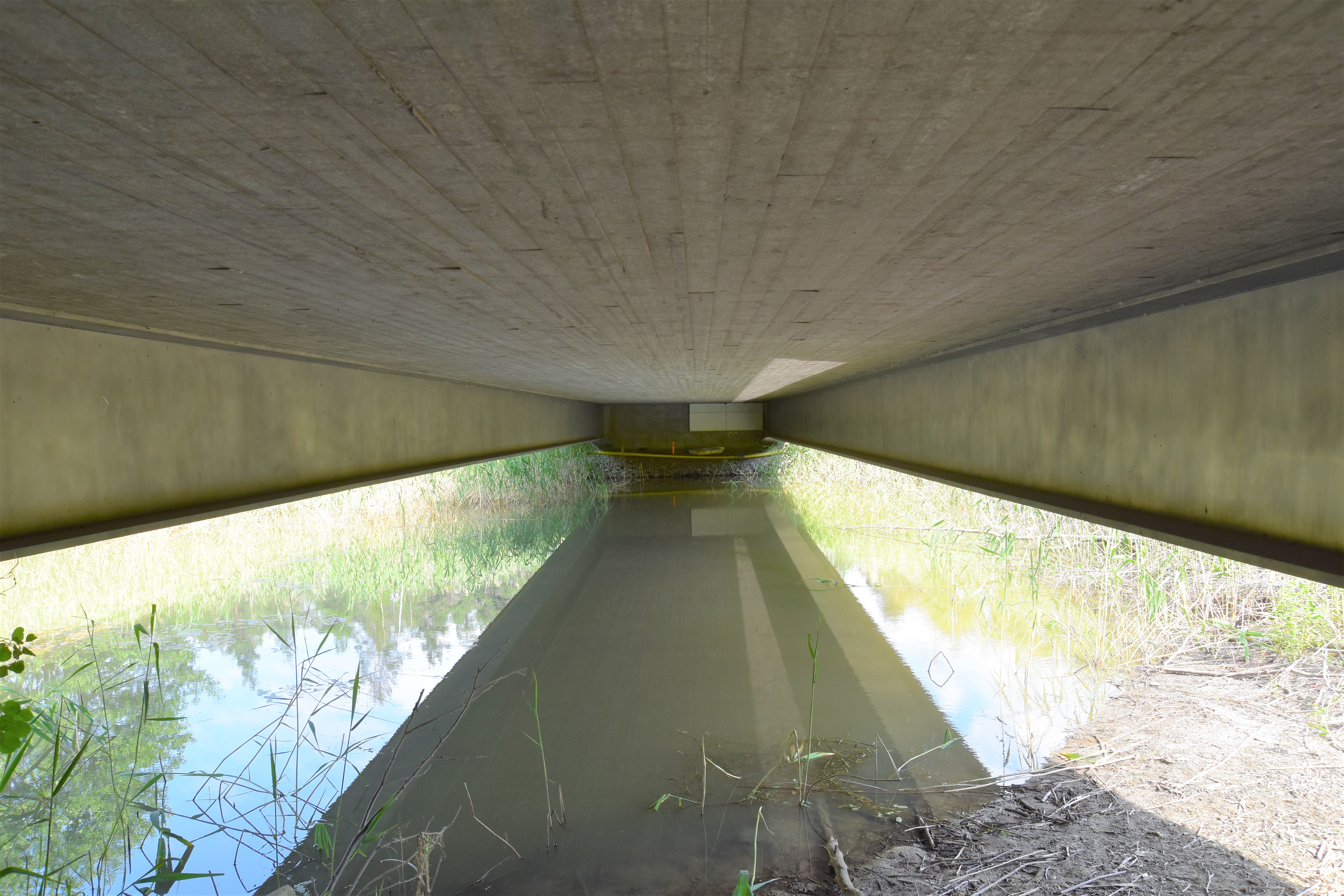 An opportunity to refine design practices

Ultimately, the Nynäshamn bridge has proved to be structurally sound after its first 11 years of life. And with no visible corrosion, it will remain so for many years to come.

Corrosion resistance is the single most important factor that determines the service life of a bridge. The data show that even though Forta LDX 2101 belongs in CRC III, it can also be used in higher-class environments. This could offer significant cost savings for bridge construction by avoiding the need to use a higher alloyed grade of stainless steel..

No two sites are the same and local factors such as low salinity of seawater can influence real-world performance. This suggests that designers could potentially consider a wider range of materials if the local conditions permit.

“The results of our inspection of the Nynäshamn bridge suggest that the Eurocode standard is too conservative in some cases,”

concludes Mameng. “As we gather more data from more bridges, we’ll develop a stronger understanding of the performance of stainless steel bridge structures and will be able to evolve the guidance in the standard.”

Images of the bridge after 11 years in use

Bridging the way to a more sustainable and economical future

The future belongs to sustainable bridges